Once upon a time, a man and a woman fell in love. However, they would fight every Tuesday night about what to watch on television. It was like clockwork; a fight every Tuesday evening at 8:00pm, and then happiness the rest of the week. But then the woman got a haircut, and the couple lived happily ever after.

So, does that story make sense? No, of course it does not. Why? Because the story that started is not the story that ended. At some point, the plot changed. One could make excuses for it. Maybe the woman’s hair was getting in her eyes and impairing her vision. But why can’t she just use a hairclip? It is a flimsy conclusion that doesn’t address the true problems.

This is the problem that dragged down Allegiant. 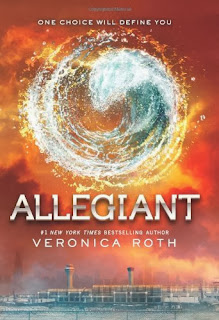 The story introduced in the first book, Divergent, had nothing to do with the story finished in Allegiant. The first book was about Tris trying to find her place in a society where she did not think like everyone else, which made her dangerous. Allegiant was about Tris fighting against a government that discriminated against GDs. Yes, both books are about the government dividing people into two groups, and people fighting back. However, the similarities stop there. Divergent and Insurgent are about fighting a power-hungry dictator, while Allegiant is about fighting against the Bureau’s discrimination. The plots of the two books stand by themselves, which is an issue with a book series.

And that is the main problem of Allegiant. The story that ended had some traces of the story Roth began in Divergent, but that is about it. If Allegiant had been a standalone book, how much would be lost? One could read Allegiant without having read the first two books and be able to keep track of things quite easily. The plot of the series, at some point, changed. There may be some lost character growth and development, but these books were plot-driven, not character-driven; the plot needs to drive the characters, not the other way around, and the plot was lost.

Which brings us to problem two: the character issues were never fully resolved. Did Tris find acceptance for her Divergence? Only because she found a society that preferred Divergence; her issue was never resolved. Caleb never atoned for betraying his sister. Four never faced his fear of becoming his father. Yes, but they never had to deal with the repercussions of their actions in previous books. The only piece of growth that reasonably concluded was Tris’ understanding of a sacrifice, but it finished weakly.

My original gripe about this series was that the plot, upon closer thought, just never held up. How could injections trigger hallucinations that people can see? How could thinking a different way change how drugs affect your mind? Unfortunately, this writing problem became a bigger one in Allegiant, and made the entire series suffer for it.
Posted by Christine at 12:00 PM