So, continuing from last week, I have decided to rank my top five favourite television shows of all time. Because you can never fairly judge things until they are completed (see Allegiant post for more about that), I am only listing shows that have finished their television run. So this date may be slightly outdated, but on the bright side everything is on Amazon Prime in case anybody wants to catch up!

So, for number five, I give you…Blackadder! 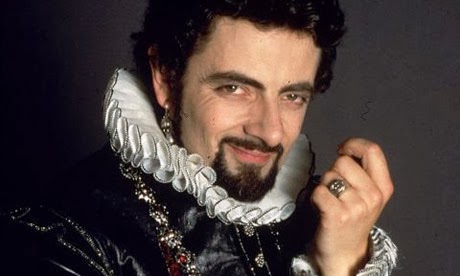 Ah, Rowan Atkinson. Americans think you can’t talk and that you have only ever been Mr. Bean, but I know better. Also, Hugh Laurie is English and Miranda Richardson is a comedic actress as well as a dramatic one. These misconceptions would all be cleaned up in America if people started watching Blackadder. Blackadder is a classic British Comedy poking fun at major eras in history.  It’s the oldest television show on my list, and the only English one (!), but I feel that it is one of the greatest television comedies of all time.

In many ways, Blackadder should be a recipe for Christine Television Indifference. The show is not serialized at all; episodes can be watched out of order, and even out of season, and everything will still make perfect sense. It is a comedy, while I prefer to watch or adventure so I can dream about them and live vicariously through the characters. But the humor of Blackadder is what truly makes it shine. The writing is always sharp and full of sarcasm, and Blackadder (all versions of him) is the voice of reason as well as the schemer who is trying to rise to the top of the monarchy. There is always the iditotic aristocrat, bumbling and usually the target of Blackadder’s, who is unaware of both his idiocy and Blackadder’s true motives. Plus there are the small references to history by trying to rewrite it, and Blackadder always failing.

The specials are also not to be missed. I love the Christmas Special, where we see a version of Blackadder who is kind and gentle, who is told by the Ghost of Christmas Past (a very young Hagrid!) that the Blackadder line will become successful in the future if he becomes a bad guy now (it backfires). There is also the Millennium Special, which is probably my favourite episode of the Blackadder series. All of the main characters return to celebrate the turn of the Millennium, when a time travel machine causes havoc. This episode teaches the viewer many crucial things, such as what killed off the Dinosaurs and how Shakespeare invented the ballpoint pen.

This all to say: go and do yourself a favor, and watch Blackadder already. It’s perfect for those long, boring plane and car rides, and makes excellent background television too if you are doing any chores around the house.
Posted by Christine at 12:00 PM