Another year, another Fall Book Season. This one was slightly less exciting for me, since there were only two automatic-preorders for me, but I thought that I might as well review them since hey! I have my own website!

So here is the first: 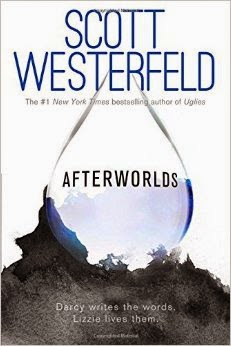 I should probably say off the bat that while I like Scott Westerfeld, I prefer his books that’s aren’t quite a real-world-y (think Uglies and Leviathan over So Yesterday). However, Afterworlds promised to be both at once. A young writer who is muddling through the publishing world (the Darcy story), and her book about the afterworld (the Lizzie story)? It sounded like a good mixture.

A common criticism of this book is that the two sides are weak and need each other. That is true; you cannot skip the Darcy chapters and just read the Lizzie chapters, or vice versa. Neither book felt fleshed out, particularly Lizzie’s story. The ending fell flat (which was admittedly a plot-point on the Darcy side), and the climax seemed to be very scattered. There was no clear endgame to the story, which means for the last four or five chapters I felt like the book was about to end only to discover more plot.

Meanwhile, the opposite happened on the Darcy side. The ending felt completely rushed. After all this time going through the process of revising, the final six months of Darcy’s story was put into just a few chapters. Darcy’s story, which was supposed to be about publishing a novel, was actually a romance. If you take out Imogen, how much Darcy is left? Darcy’s story isn’t about publishing; it’s about falling in love and coming out. It is a shame since there were so many ways Darcy’s story could have been told. She could have had a life without Imogen, but instead that is pushed into the background.

This all being said, though, the balance of the two stories was done well. The chapters were short enough that one didn’t get so lost in one story to forget the other. The two characters were not dealing with heartache or parental issues at the same time, which would feel forced. The plots were also different enough that the stories did not get confusing. One did not get details of Lizzie’s or Darcy’s lives confused, possibly because one story is in first person and the other is in third. The two stories were separate, and yet worked well together.


So overall? I think I enjoyed Afterworlds. It has been almost two weeks and I can’t say for certain one way or the other, which is probably indicative of the problems with the book. I want to hear more about Darcy, but I do not really need to read Untitled Patel (Darcy’s phrase for Lizzie’s sequel). And would it be worth reading Untitled Patel to get more Darcy? I would do so, but I am not enthusiastic. So Afterworlds was a disappointment, when all is said and done. I think.
Posted by Christine at 12:00 PM