Tada! Another book review! (Remember how I was supposed to review the last Heroes of Olympus book? Well, I haven't even finished it, so that should tell you about my feelings.)

This, however, is a positive review. I give you: a Veronica Mars book! 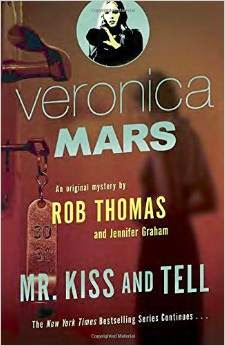 I'm not a huge fan of whodunits. This may seem strange, given that I am the most Pottery of Potterheads to Potterhead, but the whole mystery aspect was not what drew me to them. I like answers. I like knowing everything. And the whole point of a whodunit is that you do not know everything. Half the time the culprit is a new character, or something you probably couldn't work out by yourself. You have to have watched the video carefully to see a tiny detail, or know something about the victim. Truthfully that is probably how the real world works, but it can be difficult to represent that in fiction sometimes. We don't "know" the victim, and we can't "see" the video. We perpetually have to be a step behind.

So understand that, just by genre, the Veronica Mars series is not going to be my favorite. There was no way for me to figure out who Mr. Kiss and Tell was from the beginning of the book. It was the other qualities of the book that made me enjoy it so much. It is serialized--we pick up on the Sheriff Lamb/Missing and Planted Evidence plot line from the previous book (and the movie), and it has not fully been resolved yet. Similarly, we have characters from the television show come back into play (yay for Grace Manning, but WHEN WILL WE SEE DUNCAN??????). There is still the wonderful Keith/Veronica banter, and Veronica/Logan banter. It still feels, at least a little bit, like the television show, and it makes me happy to be back in Neptune.

My one complaint with the book is that, again, we have rape and murder as the main plotline. I am just slightly tired of it. Murder, in particular, is just overused in Neptune. Is it too much to want some sort of different crime to be discussed? Something with the Fitzpatricks? Corporate corruption? Brainwashing? But this was, again, a murder or rape (or both) mystery. I want something new, people! I want something a little less murdery!

But overall? This was a great, compelling read, and I want the next book now. Me needs to know what happens next!
Posted by Christine at 12:00 PM