January is over! This is usually a good thing. I don't think that anyone really enjoys January, unless their birthday is in it. If I recall, Roald Dahl once wrote that he would prefer if they just took January off the calendar and gave us an extra July instead. (I don't really like July, though. How about another October?)

The end of January, to me, signifies something else even more horrible on the horizon: 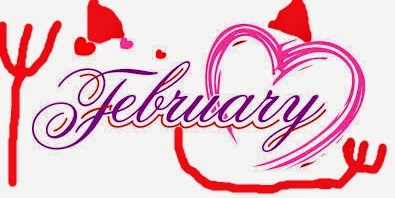 I hate February. It is a horrible month. On one had, you have engagements. Tons and tons of engagements. Tons and tons of people who have decided to exchange married bliss for singleness, which means that the number of people I can go on vacations with or call up to hang out is lessening. (This is slightly hypocritical of me. Yes, I'm happy people are happy. Yes, I'm super jealous. But it still means that if I want to go to Hawaii, I have fewer people to go with every year. Because who invites a third wheel to Hawaii? Nobody. That's who.)

Also, everyone who is already married feels the need to gush about their spouse. We get it! You like who you are married to! Now go away! I don't care that your spouse is super sweet. They probably also fart under the covers and have the annoying habit of leaving mayonnaise jars open in the fridge, but would you post about that? No. You just have to make everyone else feel inferior because you married the bestest person in the world. SHUT UP.

No (good) books come out in February. No action movies come out in February (just rom-coms with the same plot every time). No interesting sports events in February. I ask you, what is the point of February? Other than once again returning to caveman form to judge animal habits for meteorological ideas and celebrating dead presidents, there is nothing to this stupid month.

Looking back, I always hated February as a kid. There was the whole romance angle, but there was also just so much time until spring break and summer...it felt like there was very little hope, in February. Everything was just so far gone. Perhaps that is why February is always a good reading and writing month for me. Traditionally, I do anything I can to escape February and its Februaryness. A world of fiction is a much more comfortable place to be than a world filled with February.

So here is to February. You suck! Go away now!
Posted by Christine at 12:00 PM