I was on Twitter today, like a normal person, when I saw the #TravelTuesday was trending. This got me thinking....hmmm....Travel Tuesday...almost like Tuesday Travels...I should update my blog.

And indeed, I have been (admittedly slowly) working on my BABL! So it is beyond time for an update, since I originally wanted to post for every item, and this is going to be a multiple-item post. But anyway.

4. Visit a friend down in Pasadena, since I have said I would do that for years and still have not

I finally did! I did a little roadtrip at the beginning of May to visit my friend, partly because I felt like being spontaneous (although I planned it for a few weeks...so it wasn't really that spontaneous). I left after work one Thursday and came back on Sunday afternoon. While there, I feel that I learned that many of my preconceptions of SoCal were incorrect:

Okay, maaaaybe during rush hour, it was bad. But it was only Google-land bad. It wasn't a gridlock all day. In fact, when I arrived and left, all the cars were going the speed limit. Now, I don't like the style of driving in the area--they tailgate too much for my liking. But it wasn't this horror of traffic that would put into mind the Fields of Asphodel. It was just...traffic-y.

I saw Avengers 2 for $8. Apartments seemed to cost about the same as mine, but had more rooms and were much bigger and nicer. So it isn't worse than the Bay Area there, either.

Maybe the houses are. But I had some delicious scallops for dinner on Saturday, and they were fairly priced (see no. 2) and in Malibu.

Well, not where I was. There were new-age churches and these organic-y coffee shops everywhere. There were still plenty of Priuses and electric vehicles. It actually reminded me of Oregon more than Tennessee or Texas.

Now, admittedly, I was mostly in Pasadena. But it's interesting to note that those stereotypes are not representative of SoCal as a whole in every case.

Meet my friends in the Pocky truck. 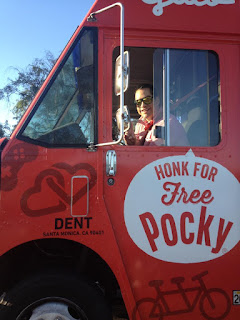 We saw this in the freeway (it was slow-ish, but not that bad!), and so we decided to honk. Little did we know that they would actually get some Pocky and hand it to us! On the freeway! While everyone was driving! It was the greatest freeway experience I've ever had.

They were so fun. So nice. Proof that SoCal people aren't all mean.

Okay, I didn't go to an Earthquakes game. But I did go to the stadium! I saw the US women vs. Ireland (US won). 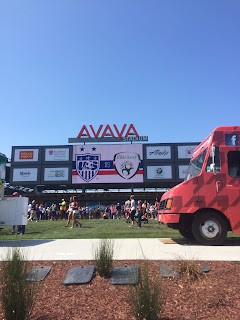 So I sort-of completed it! Ish.

I felt like I was back in college. Everyone at in a big cafeteria (like college), wearing gear all supporting the same institution (like college), and I could eat as much as I wanted (like college). Everyone was young-ish (like college). The food was higher quality, but it was eerie. It made me glad I didn't work at Google, oddly enough. I loved college, but I am done with college. I would be taking my lunch to my desk every day, haha.

The bikes were fun, though.

ALRIGHT SO I'VE ONLY DONE TWO IN MONTHS. I've got some coming down the pipeline! I promise!

Posted by Christine at 7:37 PM