Not a normal Tuesday Travels this week, since I have been too busy with, well, life, to do anything on my Bay Area Bucket List. Busy doing what, you ask? 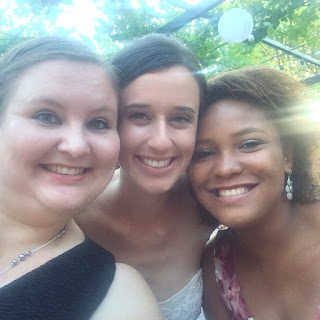 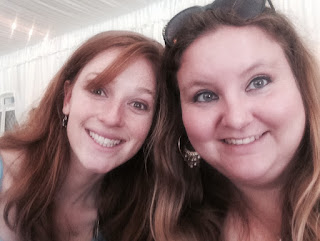 SO MANY WEDDING THINGS.

Thus far, I'm done with three out of the four for this summer. Four might not sound like much, but when you include showers, bachelorette parties, dress shopping, shoe shopping, and the actual wedding...well, they add up.

I'm staying pretty positive, which is surprising. It can be difficult, especially in the Christian community, to see people get married because it feels like they join the "real grown-up" group. (Plenty of people won't admit this is true, but talk to any Christian single and they'll admit it is so.) It can be a little difficult to see everyone happy and joyful when you don't get that joy yet.

As such, I have come up with a list of distractions to help keep me positive about weddings:

By far, my favourite part about weddings! Old friends are in town (or in the same town, anyway), and you have a whole evening to do nothing but hang out together. Catch up! Eat yummy food! Photo booths! And everyone is in a good mood because, hey, it's a wedding.

As you are probably aware, I am a fierce competitor. And my skills translate perfectly to the one competition at a wedding: the bouquet.

I remember in one of the old Babysitters Club books that Dawn and Mary Anne both wanted the bouquet, but Mary Anne caught it. Thus, I had to catch a bouquet one day. But how would I be able to? Sure, I was on the taller side of average, and willing to elbow people in the face if needed, and to tackle people out of the way, but still....was I truly cool enough?

The first time it was me, someone in their sixties, and a group of kids probably 12 and younger. So I was satisfied that I caught it.

The second time, it was just thrown to me. But hey, that counts!

This summer, though, I've finally caught it when there was a real competition. Other twenty-something women, all fighting for a group of flowers, and I WON. Twice, really, because the bride originally threw a napkin, which I caught and then threw back at her. I was there for a napkin--I wanted the bouquet!

I caught the bouquet as well. Success! 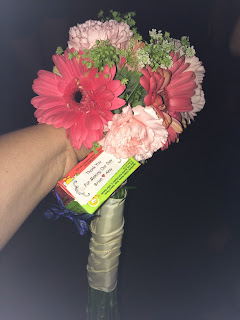 (Please note that the bouquet doesn't really work, since there were at least two engaged women in that group, both of whom have since got married, and I'm still very single. But I still won the bouquet game. I'll take that.)

I get to put on pretty make-up and a dress! (And comfy shoes, because I am a comfy shoe sort of person.) I hated getting dressed up for a while, but I'm beginning to love it again--perhaps because I know that the onus is off of me, since everyone will be gushing about the bride and ignoring the single lady. Yay pretty times!

Just in case, I always like to take (mental) notes on what I really like at a wedding, so I can keep it in my for if/when I get married. It can be an activity, food, speech, game, vow, seating, or whatnot...but almost every wedding I've been to, I have received at least one exciting new idea to mentally play with.

(Alright, fine: also mental notes about ideas that I don't want at my wedding. Sometimes what works for a friend does not work for me!)

Yes, it may be difficult to remain optimistic. Yes, it can be difficult to see someone get married before me. But that doesn't change the fact that I am, 100%, completely, thoroughly EXCITED and THRILLED and HAPPY for my friend! They are married and entering a new world, and I'm going to be positive. So woot!
Posted by Christine at 11:11 PM