So I'm starting another series, this time about planning a story--or not. Both can be effective tools in different ways. I've used both, and sometimes switched halfway during the book. So as a ground rule, I should say that everything I'm talking about should be fluid. Don't feel constrained into following your plan. Don't feel like you aren't able to start planning ahead if you need to. These are tools, which mean that you should use them when you need to--and not planning is just as much of a tool as planning.

This week, I am going to be discussing working without a plan, or as I think of it, Freestyle Writing. Generally speaking, most writers start off that way, and many ideas start that way. It is simply writing what comes to your mind. I wouldn't say that it means you don't know WHERE you are going; you might still have an idea of the plot. But you don't have a specific to-do list that you are working off of.

There are many advantages to this. For one, it is very freeing. If you get bored of the story, you can change it, and you don't have to worry about hours or plotting and planning lost, or not knowing where you're going. You can go as the plot go, as the characters go, and stop writing when you're bored. You don't have to focus on the boring parts. That's pretty awesome! No boring parts? I wish my first drafts were free of boring parts. It’s just like taking a road trip. If you don’t have any stops planned, you can go exactly where you want when you want to. Mel Gibson would have a field day. 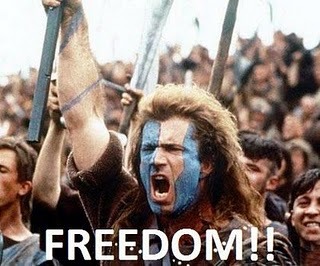 But, like being free, that freedom is the main disadvantage. If you don't know where you are going, then you don’t really know what you are doing. What happens when the idea runs out? You haven’t worked out how to get from Plot Point A to Plot Point D. If you’re trying to plant clues, you might forget to plant one. Again, this is just like a road trip. If you’ve got no plan, then it can be difficult to feel like you have a purpose, and then it is hard to get going.

My piece of advice for when this happens is to use your freedom! This is when something like a genre change, a point-of-view change, a protagonist change can all come in handy. Remember, this is your first draft—you can keep the point-of-view or protagonist consistent later. Right now, your job is to get words on the page, and go from Plot Point A to Plot Point Z. Whatever you can do to make that happen is a valid technique. Change the novel as much as you can while still keeping the same general story. If nothing else, those changes  are going to create new problems and new situations for your characters, and that is going to start shaking things up and causing problems—and problems are the blood of a story.

I’ll discuss strict outlining next week.
Posted by Christine at 3:00 AM

Email ThisBlogThis!Share to TwitterShare to FacebookShare to Pinterest
Labels: How To Write, Plotting, Weekly Writing Wrambling