Another Monday Musings, another book review! This time, we are (once again) doing a book that came out several months ago, Royal Wedding by Meg Cabot. 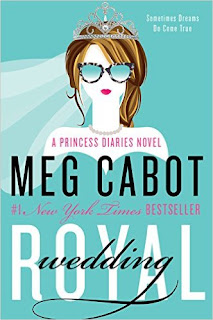 When this was first announced, I was kind of blown away. I thought that the Princess Diaries series ended well; I loved the final book, and it was a satisfying finale. However, since this jumps eight years into the future, it doesn't exactly feel like a sequel. It isn't Princess Diaries: The College Years. It's an adult book, with a very frank discussion of sex and adult relationships, and not as much of whimsy that a bildungsroman can provide.

So some of the logical plotlines from the original series are gone, as well as some of the characters. However, most the main characters are back in Manhattan and friends with each other (and still dating the same characters, for the most part). I can't say that it picks up where Forever Princess ends, but there's definitely no major changes that will confuse readers. That's somewhat unrealistic, but it is lampshaded, so at least the book acknowledges the problem.

But the major problem with the book goes unacknowledged. Royal Wedding is the big, happy bow on top of everything. Forever Princess gave most of the characters a happy ending--this is supposed to be a bit of a fairy tale, so you expect a happily ever after--but the endings were all true to the characters and the future wasn't guaranteed to be amazing. Mia had her dream boyfriend, but she was about to move away for college. Her dad had a new woman, but she clearly wasn't an enamored. All the friends were splitting up. It was a happy ending, but it was still realistic.

Now? Mia's been handed a sister, her parents together, her dream husband, the crown, and kids in the time period of about two weeks. She didn't have to work for it; it was all handed to her. The character development from the previous series is gone. Mia's parents are brought back together with the disappearance of Ms. Martinez and the offscreen death of Mr. G. Despite Mia's Dad's alleged infertility, he has another love child that he never mentioned. Mia's birth control just happened to stop working. Everyone (except Lilly) is in love with their high school sweetheart. There's a happily ever after, but then there's just a cliché ending, and this falls firmly into the latter category.

Royal Wedding the book equivalent of cotton candy. Fun, yes, but also somewhat frustrating, because you were hungry and the cotton candy is just saccharine and not filling. It came back for one final swing, and it almost turned into a parody of itself, and the series as a whole. Everything that was worked for in the past books--Mia's relationships with Lilly and Tina, Phillipe's growth, everything--has turned into a joke. The book was fun, yes, but it was also frustrating.

Will I buy the future Olivia Grace books? Probably. But I hope they go back to the original Princess Diaries way: realistic and yet fantastic, happily ever after and still true to life.
Posted by Christine at 12:00 PM