Back on track for Tuesday Travels, and working on my BABL! A few weeks ago, I had brunch in Willow Glen with Estelle of my San Francisco Adventure fame, and so I decided to finally stop at Bertucelli's La Villa Gourmet, an Italian delicatessen in the neighbourhood, to buy some ravioli to cook.
I don't know when I first heard of the place, but the reputation preceded it, and after reading a few newspaper articles about the business that raved about their ravioli, I knew I wanted to give it a try! 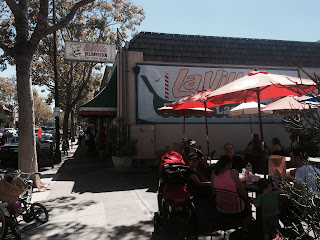 ﻿
First thing: yes, it was a Saturday lunchtime, but the place was insanely busy. I ordered ahead and still had to wait a good twenty minutes to be served. Most people were buying Italian sandwiches and food from a hot food counter. I couldn't see the hot food section, but the sandwiches looked good; they were cutting all of the meat fresh from long salamis and sausages, which is something you don't normally see. No Oscar Meyer Bologna here!

I went for a basic cheese ravioli with a meat tomato sauce (Bolognese? Marinara? I'm not entirely sure of the difference), but they also have lobster, feta, chicken, and beef raviolis, plus sometimes seasonal flavors. I could see more sauces, including alfredo, vodka, and pesto--and I'm fairly certain more were hiding from me. However, they were already almost sold out of ravioli, so ordering ahead is definitely the way to go.

The ravioli came in one big square! I wasn't expecting that; I assumed it would already be broken apart, but the instructions on the box were quite specific about not breaking them. I just dumped them in a large pot of boiling water for a few minutes, and presto! Ravioli. Throw in some sauce, and dinner was served.﻿
This was definitely some of the best pasta I've had, particularly out of my own kitchen. The ravioli were so tender, and the cheese was soft but not mushy. The pasta was slightly thinner than expected, but it tasted stronger than I am used to. My experience with fresh pasta has been limited to the refrigerator section of Safeway, which isn't really that fresh. But this pasta was still firm, not floppy; al dente, and with the flavor that normal dried spaghetti lacks. It was like a real carb. Spaghetti noodles don't taste like bread; this almost did. It had that wheaty, carby deliciousness.

The sauce was a bit of a let down. Originally, I tried some cold and it just tasted like Ragu, but once it was heated up it tasted much better. It was also somewhat sweet, which worked well with the cheesy ravioli, but I think I would have liked something a little more tart. Also, I didn't see or taste any meat, so I think I got the wrong sauce. C'est la vie.

But was it good? Yes. Usually I hate leftovers, but I really looked forward to reheating my ravioli, and it kept shape and tasted fine a few days later. Would I go again? Yes! But I might want to try a different sauce (mmm, pesto), and I'd love to try some other pastas as well as their other raviolis. Given how amazing the pasta part of the ravioli is, the noodles but be amazing. There was also some butternut squash gnocchi that sounded delicious. And I wonder if they make a spumoni? And the sandwiches seemed yummy too. I think I will wander back down again!
Posted by Christine at 12:00 PM