Hey, look! A book review that is somewhat timely! Go me.

I loved the Lizzie Bennet Diaries, and really enjoyed the novelization, so I was quite eager to get my hands on The Epic Adventures of Lydia Bennet. More Lydia! Would that mean more Lizzie? More Jing? Will I hear about weddings and babies? I WANT BABIES AND WEDDINGS, PEOPLE. 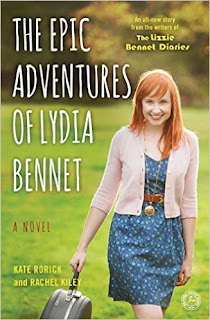 So, perhaps because the Lizzie Bennet Diaries focused quite a bit on the lives of Jane, Lydia, and Charlotte, I assumed that The Epic Adventures of Lydia Bennet would focus on the other characters as well. Perhaps the focus would be on Lydia, but there would be a good chunk on the others. However,  Lizzie is in maybe three scenes, Jane is in maybe six scenes, and Darcy, Fitz, Mr. Collins, and Charlotte don't even appear. We do get a good bit more of Mary, and some nice bits with Mrs. Bennet, but this really is Lydia's story.

The author's discussion at the end of the novel mentions that Lydia's story never really finished on the vlogs, but I never thought that was the case. I thought that Lydia had more healing to do, yes, but that she really was beginning something good in her life. It made sense that it would take place offline and that we wouldn't get to see it. So the book's arc really feels a little unnecessary, as we follow Lydia around during the summer after the vlogs end. She's taking classes, she's trying to figure out life, and she's healing.

But while that make sense from a plot standpoint, it isn't the most interesting thing to read. The title promises adventures, but Lydia's adventures are much more internal than anything else. She's learning how to be the "new Lydia" instead of the "old Lydia", but reading about she isn't enjoying drinking and how she's falling for jerks isn't that compelling. The end of the book promises an adventure, much like how the end of Lizzie's blogs promised adventures for Lizzie and Jane, so perhaps we are brought full circle with new adventures for Lydia. But her getting there isn't as interesting as Lizzie and Jane's growth. While reading the book, I just sort of wanted it to end so Lydia could get her adventures.

I think part of it might be the format. The savior for Lydia, really, is the actress Mary Kate Wiles, who just makes Lydia so lovable despite her difficult portrayal in the source material. The authors of Lydia's vlog and who assisted on LBD are back, but their script definitely falls flat without Wiles to make it buoyant and effervescent. Lydia's trials were heartbreaking with Wiles' portrayal; her recovery without it just seems so flat and listless.

Now, Wiles narrates the audiobook, so I wonder if that is any better. But the book is (unfortunately) a bit of bore, which is quite disappointing for our beloved Ly-di-ah.
Posted by Christine at 12:00 PM