I am here! In one of the most spiritually significant sites in the world! I made it!

It was a busy day full of traveling and sites and traveling and more sites. Breakfast was very carb-y today, since that was mostly what they had to offer. I feel I am learning a lot about Israeli breads while I am here. 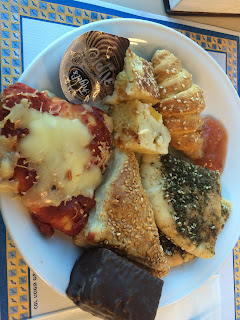 We have: Israeli Nutella stuff, bread pudding, a cheesy croissant, jam, more of that delicious pita with sage, something that looks like spankiopita but didn’t have spinach, a piece of cake-y stuff that was essentially a Ho-Ho, and pizza bread. When I get back, I may never eat bread again.


From here we left the Sea of Galilee. It was a beautiful day—the hotel was very peaceful as we left.

On our way to the coast, we passed Mount Tavor, which can allegedly be seen from every part of Israel. I can’t see it from Jerusalem, although I might be facing the wrong direction. Catholics believe that Mount Tavor is the site of the Transfiguration, although many other (Protestant) scholars think it is Mount Hermon. This is also where Deborah and Barack did their GIRL POWER battle in Judges. 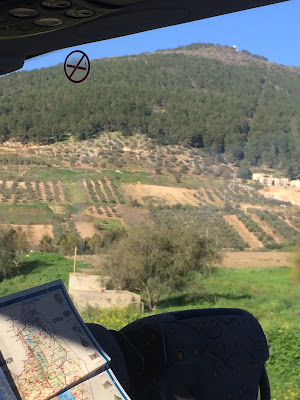 Then we went off to our first stop of the day—Nazareth! This is where Jesus would have grown up. It’s essentially on a mesa, overlooking the Jezreel valley, and while a lot of Christians used to live there, now it is mostly Muslims. 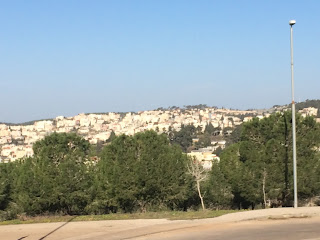 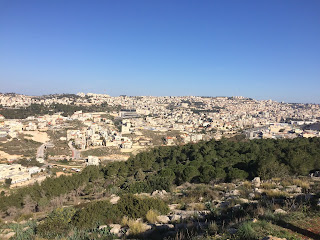 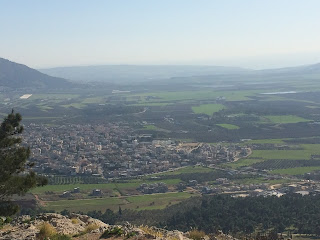 It is amazing to stand on Mount Precipace, right by Nazareth, and see what Jesus might have seen while growing up. Like, this was as common to him as Middlefield Avenue was to me. It’s home. And true, the trees have changes and there might be some new varieties of plants, but it’s a pretty good idea of what things would have looked like. 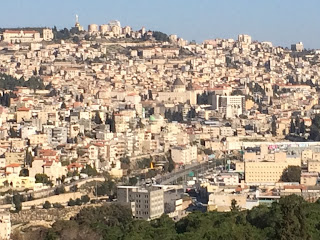 The grey mound is Church of the Enunciation, where it is believed that Mary received her vision from the angel about Jesus. The gold mound is a mosque. Jonah was also from around here, on the other side of the mesa (Gat Hefer).
On the Mount, we also saw an anemone, which is the national flower of Israel (I believe), and quite pretty. 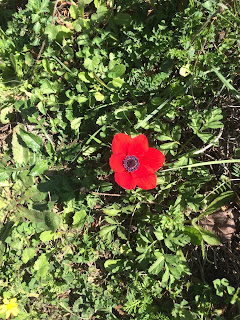 Next stop: Tel Meggido! Meggido has twenty-five layers of buildings for archeologists to dig through. King Solomon was around the sixteenth layer, and you can read about it in 1 Kings 9:15. 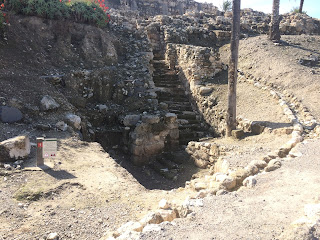 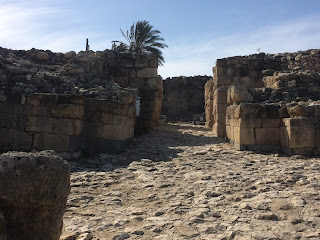 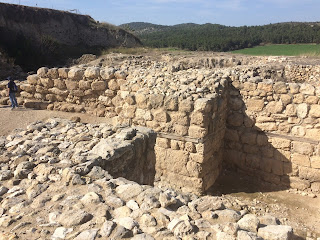 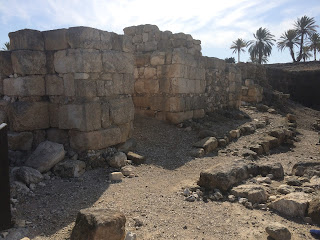 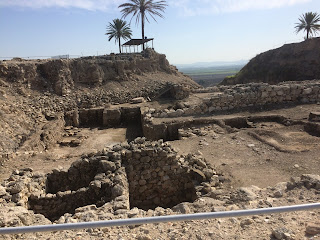 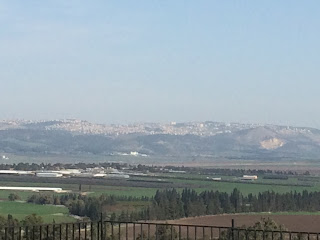 Looking around Meggido, I thought about how this was the Promised Land--the land of milk and honey. I always imagined Israel as kind of a desert, but it is quite pretty--particularly in comparison to the rest of the Middle East. No wonder this was such an amazing, wonderful land. 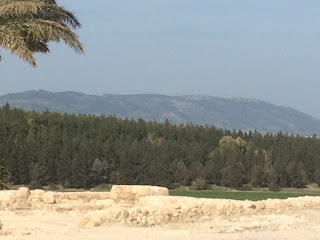 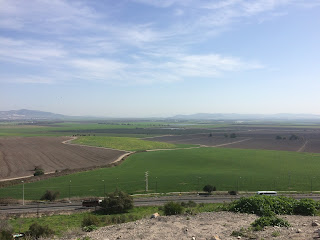 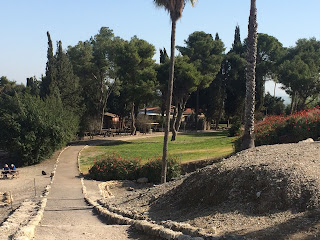 From here we went to lunch--another Druze restaurant. Falafel again! It wasn't as tasty as the day before, but it was still yummy.
Mount Carmel was next--one of the sites I was most excited to see, because it is where one of the most epic take-downs in history took place. Elijah destroying the Baal worshippers! If someone ever makes a rap/hip-hop musical a la Hamilton for the Bible, this needs to be a rap battle. It is just such an awesome time.
On the way to the site, we passed some tombs, which look like what Jesus would have been buried in. 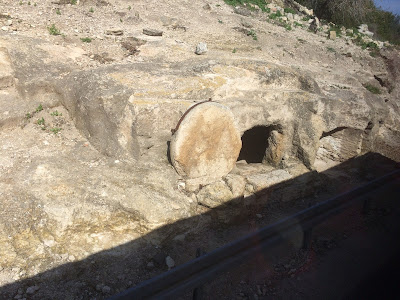 Now: Mount Carmel! It's obvious that this is an important place. Look at this statue of Elijah! 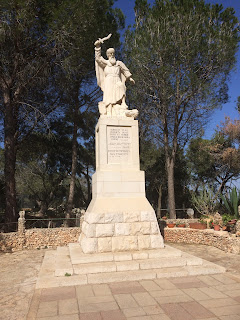 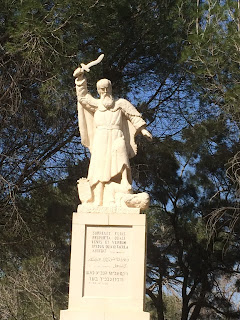 Down there, the little white line, is the Kishon Brook, where the prophets of Baal were killed after that battle. It's real! It's way closer than I thought! This is definitely one of my favorite sites so far. 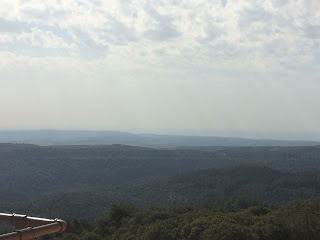 Next stop was Caesarea on the Sea, which is the Malibu of Israel. Allegedly, houses cost 45 million dollars in this area; I'm taking that with a grain of salt, though. 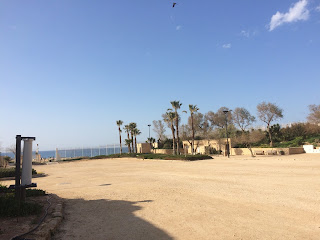 There's a large theatre here which is still in use today. 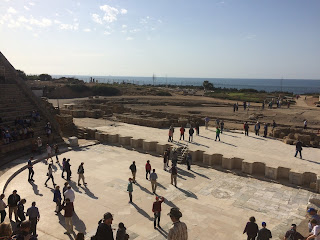 This theatre also has the only reference outside of the Bible to Pontius Pilate, who is named on one of the seats. 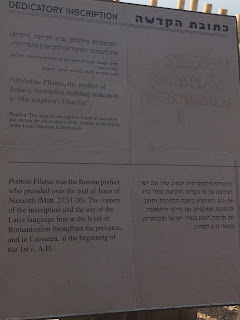 I also got to see the Mediterranean Sea for the first time! Sadly, no time to go swimming because it was Shabbat and the place was closing fast. 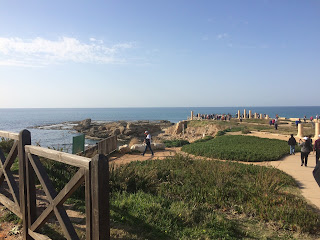 From there we got to drive to Jerusalem! We are here! There is a huge fence around the city, preventing people from sneaking in.

Once at the hotel, we got to wander around a teensy bit. I found an ATM!! This is happy news. We also got to see an Orthodox Synagogue, but I didn't take any photos of it for respectful purposes. We only saw the men thought; I don't know if the women went somewhere else, or if they were at home preparing the Shabbat meal, or what.

The city is empty for the beginning of the Sabbath. Very few cars are on the road, and the people you see around are tourists. It is like the Super Bowl is about to start; nobody is shopping or doing anything. Kind of strange.

Anyway. Now it is time for bed, and then tomorrow exploring. Hooray! Hello, Jerusalem!

*
Periodic updates throughout the day are available on:
Instagram (photos)
Twitter (text)
Keep an eye on my adventures!
Posted by Christine at 11:59 PM