Hello! SCAM is today! So I am live blogging.
What is SCAM? It is a gymnastics competition that has a long and storied history of Americans winning even when they shouldn't. It is a scam! Hence the nickname.
Two American competitiors on the WAG side today--2012 Olympic AA Champion, Gabby Douglas, and Maggie Nichols. Both were on the Worlds team last year, and both are trying to get on the Olympic team this year. If they picked the team today, they would probably both make it, but Trials isn't today. SCAM is.
Anyway. Starting at 10:00, when it is televised on NBC.
10:01 Hey, NBC changed their music! It is the same tune but a little more subtle. Hmm. I don't know if I like it.
10:02 lolol Al forgot Tim's name. Al schadenfreude is a true joy.
10:03 Sam's path is NOT the same as Gabby's. Gabby took some time off and then came back last year. Sam kept competing and got injured. Also, MAG gymnasts have an easier time as they get into their twenties. Hmph. Nice vault from Sam, though.
WHY DID THEY BRING BACK THE STUPID COLOUR-CODED TRIANGLES?????? Are they actually useful?
10:05 Oh, blah blah SCAM is so prestigious blah blah.
10:06 hmm. Comparable vaults for Nichols and Douglas upon rewatch.
10:07 Maggie's bars were quite nice. She has a lovely swing. Some leg separation, particularly on the Doyle layout dismount, but nothing super serious. I don't know if she will catch Gabby yet, but she has a chance come beam and floor.
10:08 Gabby's bars. Ahhhh. You would never think that American's have so many bars issues? And I guess beam is turning into the new issue. Anyway. Cleaner than Maggie's.
10:10 Awwww, baby Gabby flashback.
Maggie got a 14.633. Gabby is at 15.266. Woot!
10:12 Mai isn't really a bars swinger. Wait until her floor!
No, Simone isn't here. She doesn't need to be. Her standing on the team wouldn't be changed by competing (and undoubtedly winning). So stop trying to make up rumors about why she isn't here.
Ugh. Why would NBC show international competitors? Let's have another in memoriam feature after this one. It isn't like I'm here for the gymnastics. 😡
10:20 I love that Under Armour commercials. It has Maggie, Mykayla Skinner, and Madison Kocian--but strangely, no Brenna Dowelll, who actually made the worlds team last year (unlike Mykayla, who was the alternate), so I don't quite understand why no Brenna?
Anyway.
10:22 Well, I would say that the Olympics are more exciting than collegiate gymnastics?
10:23 Ugh. Today is not Nile's day. He has had falls, and nothing is how it should be. Poor guy.
10:24 YES TEAM GB WON A MEDAL AT WORLDS!!!! Yes they did!!!! It was wonderful. Anyway, Amy Tinkler. Nice routine, although it isn't quite as amazing as many of the other British girls. It works in the AA, but I would be surprised if we saw it in TF at any point. Yeah, her score is in the thirteens. It wasn't perfect.
10:28 Commercials again. I'm starving but I screwed up my back and I can't quite walk far. Like, to the kitchen. So I remain hungry.
10:30 "...It is called the AMERICAN Cup after all." So that makes it okay for the Americans to always win? It is a Scam, I'm telling you!
10:32 Also, Gabby didn't really dominate in London. She did well, but I feel that domination means lots of medals. She got two. Yeah, that is a third, but it still seems so small for the word domination. 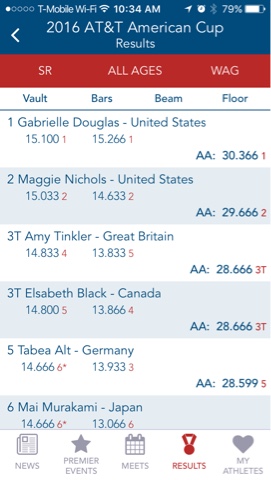 Oooh, yes. I am here for an Ellie and Amy tie for bronze.
10:36 Gabby on beam. It always scares me. But so far, nothing too wobbly. This is very clean, actually. Maybe some uncertainty on the turn. Oh, I love piked jumps. Her dismount wasn't perfect, a little low, but that honestly is one of her best beam routines.
10:39 14.966?? SLAY GIRL.
10:40 Under Armour commercial again! I still really like it.
10:41 "Some weekends only last a few days," says the Hamptons Inn spokeslady. No, I'm pretty sure that all weekends are like that.
10:43 Oh hey, a MAG routine! Parallel bars isn't my favorite (it just looks painful to land in your armpits), but nice routine from Kato.
10:46 Yeah, Gabby's score was low, but the dismount was pretty bad. A shame, since that usually doesn't cause the issues, and the rest of her routine was outstanding.
10:48 Doesn't Maggie look happy? She reminds me of Shawn a little--always so smiley.
10:49 RIO IS THIS YEAR AND I AM SO HAPPY.
10:51 Yay, PacRims! Simone! A competition in my time zone! It is the little things.
10:53 More parallel bars, and my armpits hurt. Ooh, and now Ellie Black. Wobble on the double turn, and another balance check. Oh dear, she seems rattled. Better layout, but another big wobble on the full. This is just balance checky all throughout. Messy twisting layout, but she stayed on, so that works. Won't be a nice score though.
10:56 Under Armour commercial again!
10:58 Oooh, will they mention Gymcastic? They are discussing Kyla and McKayla's retirements, but they seem to be avoiding how she announced it, and the contents of the interview. Well, I guess USAG media people need something to do.
11:00 Why all these parallel bars routines and no beam? I want some beam! They could time these routines better.
11:01 Ooh, Amy Tinkler is on beam. She is one of the better beam workers for the Brits, which is good since they always seem to suffer on beam. Her leaps are a little short of 180. Oh, I love her eyeshadow. Triple twist has some messy legs, but that should score higher than Ellie.
11:03 DARN IT, I MEANT 2016, NOT 2015. I hadn't made that mistake at all this year! Argh.
11:04 Ooh, Simone voiceover on the PacRims commercial.
11:06 Huh, Amy scored less than Ellie. I know that judging has been strict on beam today, but that doesn't seem right. I need to look at these D and E scores.
11:07 Oh, more parallel bars. They better show this many high bars routines too.
11:11 And another one? This seems ridiculous. But good for those who like MAG, I guess. I'm here for the WAG.
11:12 Maggie on beam! Lots of wolf turns. I like the jump into front tuck, you don't normally see things in that order. She is hiding some tiny balance checks quite well but with this set of judges she might still get hit. Close to the bell as she dismounts, but in time. Same dismount as Gabby, but cleaner, albeit not perfect.  Hmm. A very hmm-y routine.
11:16 Looks like the judges did get those balance checks--she scores lower than Gabby. So this is essentially Gabby's to lose? Maggie is a better floor worker, but still. 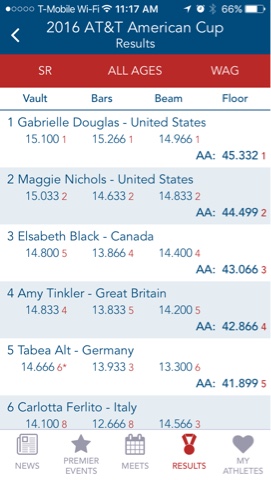 Haha, Carlotta's in sixth. Also, it looks like I missed some bars issues by half the competition. Oh well.
11:26 Volleman on floor. Well, that music screams Rio, doesn't it? Carinvally. Nice, but simple routine.
11:27 High bar is splatty. Wheeeeee.
11:29 Ferlito on floor. How Vanessa Ferrari made Italy a gymnasticsy nation is quite impressive. But I've never really liked Ferlito's style. But it was a decent routine, nothing too big in there. It works.
11:32 High bar! My favorite MAG activity. And splatty! Good times all around.
11:33 Floor is splatty now too, Tabea Alt is down. Her choreography is very 2012, there is something Jordyn Wieber-like about it. Dismount is OOB.
11:35 Betincourt is splat as well. But he had a great one armed giant. (They are amazing, I don't know how it works, how can you manage with one arm?)
11:38 Under Armour commercial again!
11:47 sorry, trying to get ready to go out. I like Tinkler's floor. Fewer splats now.
11:50 Maggie's floor was alright, some very nice landings except for the dismount. I preferred her old routine. I liked the flamenco hand waving.
11:51 Sam goes splat.
11:52 good score for Maggie on floor. They are kinder here than on beam.
11:54 Gabby! Just hit and it is yours. And she hits, and that is that! 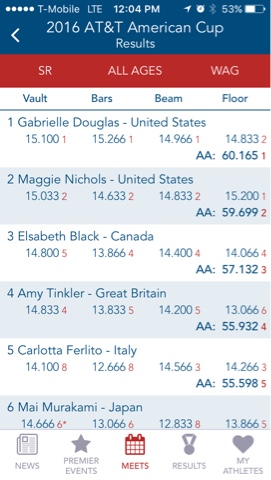 Email ThisBlogThis!Share to TwitterShare to FacebookShare to Pinterest
Labels: gymnastics