I always like to make New Year's Resolutions, mostly because I'm the sort of person that likes a list. To be more specific, I like a list because I can cross items off of when they are completed. I think it's satisfying to see a list full of crossed items. It makes me feel productive, I suppose.

Which is somewhat ironic, because I never, ever succeed in my New Year's Resolutions.

Take my perennial New Year's Resolution: To get published. This has been a staple of my list for thirteen years or so. Have I tried to get a novel publish? Well, yes, but the resolution wasn't to try. It was to succeed. I guess I took something from Yoda there: do, or do not, because there is no try. Trying doesn't seem like a valid excuse. Doing is the only thing that matters.

But you learn plenty from failure. Maybe I haven't gotten published yet, but I have still continued to write and edit and create, which will eventually help me get there. One year I resolved to drink eight glasses of water a day; maybe I didn't always get to that critical 64oz all 365 days, but I was still drinking more water and less sugary beverages. So the attempt is still important. 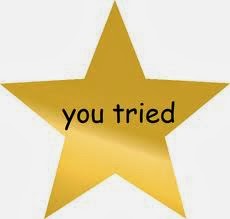 However, attempting to try isn’t quite the same thing as fully attempting. I can attempt to try to get published, but that attempt does not require the same work or dedication as attempting to get published. One could read it that way, but more than likely “trying” is just a blanket to hide under. Well, I tried to drink eight glasses of water on January 2, but didn’t. There’s no fault there, because you technically succeeded: you tried. But then, what is going to make you drink your eight glasses of water on January 3? February 17? December 31? You already succeeded in your resolution. If you were straight doing, though, then you can’t give up the next day. Fine. I broke my New Year’s Resolution on January 2, when I had only two glass of water. But I have to try the next day, too, because this resolution hasn’t gone away yet. Perhaps you might be able to average out to eight glasses of water a day by December 31.

In other words, New Year’s Resolutions are a thing I should hate, but I do every year because I have goals I want to reach. And I know I might not reach them this calendar year. But I might make some strides by December 31. That seems like a worthwhile activity to me.

NEW YEAR’S RESOLUTIONS 2013:
Maybe not a doable list. But some good lifelong goals to work on, anyway.
Posted by Christine at 12:00 PM