This is apparently my second Monday Musings of the year. My chickens, I need to get back into the swing of blogging.

Anyway, this week I am (finally!) posting my review of Go Set A Watchman by Harper Lee. I remember the day this was announced very clearly: I saw that Harper Lee was trending on Twitter, and immediately thought that she must have finally died. So imagine my relief when I saw that not only was she still alive, but a new book was coming out!

Thus, one of the easiest book buying decisions of my life. 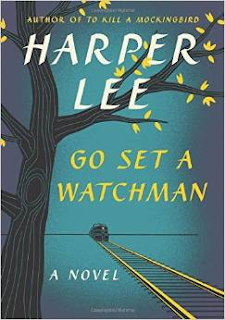 I knew, coming into it, that the book wasn't finished. It was just set among Lee's things, and so it was never truly finished and prepared for publication. I knew that it had inconsistencies from what happened in To Kill A Mockingbird, notably the result of the Tom Robinson trial. I opened the book and was half expecting a note from the editor about all of that, but there wasn't one. I also expected some clunky dialogue or misspelled words, but there weren't, so clearly someone touched it up before publication.

What it is, though, is a continuation of the original bildungsroman and Scout's (or now Jean Louise's) continuing growth into an adult. Scout still idolizes Atticus, still keeps to many presumptions about people, and still remains as finicky as ever--all endearing qualities, I should add. But they are all slightly immature, and Go Set A Watchman is Scout's final journey into adulthood, by her realizing the truth about Atticus.

And, indeed, we all learn the truth about Atticus. Atticus is possibly the most beloved figure in American literature; he is certainly one of the best fathers. He was always good, honorable, and ready to fight for what was right, regardless of the chances of success or his own personal cost. He was always willing to help Scout and Jem on their adventures, and always wanting to do his best to everyone. If we were going to make a list of the least corrupt characters of all-time, Atticus would probably have been near the top.

So his fall from grace in Go Set A Watchman gives Scout a shock, as well as the reader. How could Atticus, the ever-so-good and wonderful man, suddenly be a racist? Well, the answer is that it wasn't sudden--it was there all along. Scout, and the reader, is forced to struggle with the idea that he wonderful father has some major flaws, and isn't the hero she always pictures him to be. We always saw Atticus through the wondering, adoring eyes of eight-year-old Scout; now twenty-six, we're forced to see the grey in our interpretations of him.

Of course, that is the point of Go Set A Watchman: that a person has to develop their own conscience, and their own sense of right and wrong. We cannot rely on another to choose our moral ground. I would say that this is an accurate lesson, and one many people need to hear. People don't tend to make up their own decisions regarding right and wrong, and then continue to be disappointed when their heroes don't follow their ethics. But is that a valid reason to sully the character of Atticus Finch?


"Atticus, he was real nice."
"Most people are, Scout, when you finally see them."

But if our original Atticus isn't nice anymore, I do wonder whether we can really consider this Atticus the same Atticus Finch? This book was written before To Kill A Mockingbird and Atticus' character was finalized. I'm entirely sure if it counts, because it isn't building off of the character we've read and loved; it is, instead, the character he was first conceived as. Lee had faith in humanity, then. She didn't want our version of Atticus to be shattered; rather, she saw it as entirely possible for a man to truly be good and honorable, as much as Atticus can be.

So this original Atticus, the flawed one, becomes the idealized. But in Go Set A Watchman, the idealized becomes flawed. Perhaps the only thing you can really get from this book is that people change.
Posted by Christine at 12:00 PM