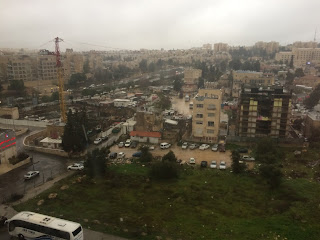 I know, for a trip that is in February, the fact that we will only have one rainy day is pretty fantastic. I should be grateful. I should be glad it happened in Jerusalem, where we mostly do things inside, instead of around the Sea of Galilee.

But I was cold! And wet! And lost some picture opportunities! Oh, well. I will survive.

Today we mostly stayed inside the city of Jerusalem—in fact, we didn’t leave the gates once. What is so remarkable about that is that I never realized how close together everything is. We saw the Bethlehem hills (not the actual city, as that is currently under Palestinian control and unsafe), the Mount of Olives, the Garden of Gethsemane, and everything was really close together. I always imagined these places being maybe two hours away by foot, but it really is more like ten minutes—maybe half an hour, in the case of the Bethlehem hills. It is just so compact.

Our first stop today was the Mount of Olives, which is just outside the main part of the city. You have a good view of the mosque that is where the old temple(s) were, as well as some of the city wall.
﻿
﻿

From here we walked down a little ways to Gethsemane. Gethsemane means olive press, and is at the foot of the mountain where the harvested olives could be pressed into oil. Of course, there is now a church there, built around the rock where Jesus prayed after his Passover meal. This is one of the more beautiful churches I have seen, and it is very somber. The priests were doing something in there when we entered (which makes sense, since it was Sunday morning), but it just added to the quiet feeling. 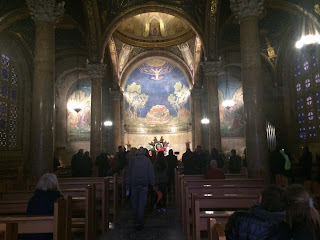 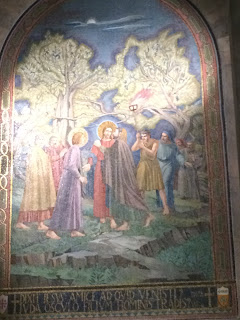 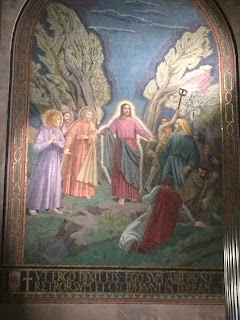 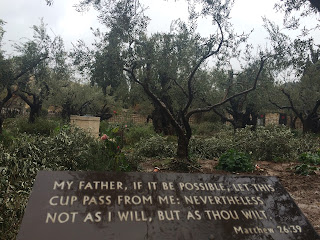 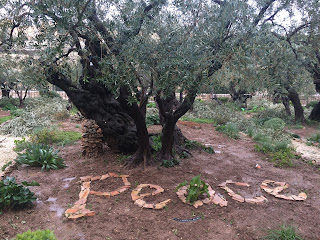 The garden outside the church is filled with olive trees, and quite peaceful. I can see how it can be both a lovely place to pray, and to take a nap. Olive trees aren’t particularly large or leafy, so even in this garden you would get a good view of the night sky. You could possibly also see the Temple from the garden—you certainly could see the rest of Jerusalem—and it makes picturing that night of prayer in Gethsemane much more vivid now that I have seen the place itself. 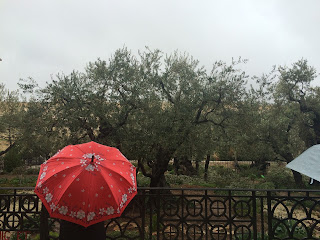 Our next stop was to see one of the nearby upper rooms, as a rough replica of where Jesus would have had the Last Supper (we are travelling backwards). The room they believe would have been in this area since (if I remember this part correctly) the scripture mentions that a man was getting water, and this is where the small sect lived that had men fetching water? I might have that part wrong. Anyway, it certainly is celebrated as being in this area, and it is barely a five minute drive from Gethsemane. The room, which isn’t the original, is made out of white stone like most of the houses in Jerusalem would have been. Back in the day, unlike Da Vinci’s version, the men were probably sitting on the knees or lying down at the dinner table. I can’t really see this as being comfortable, but never mind. 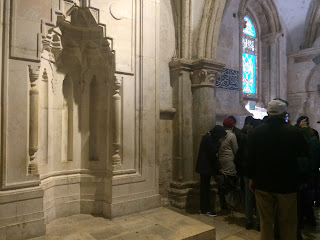 
As someone who has never been in a synagogue before, I had a few observations:

1.      Women and men are separated. I don’t just mean on different sides of the church, either—I mean there is a physical wall dividing the sides so that you can’t see each other. Is it impossible to worship with the opposite sex around?  I don’t know. Your heads are covered! What is the problem with that?


2.      Women have about 1/3 of the room of the men. The men get to chant (I believe scripture) and wander around, while the women quietly pray and read to themselves. Don’t you need both for a good relationship, though? The scripture and community, and the quiet reflection? Hmm.


3.      Dancing while reading/singing scripture sounds a bit more fun, and I should try that out.


After this, we went and found some graves from the First Temple Period. People would lie on the ground for a year, before being put in the large grave with their forefathers. 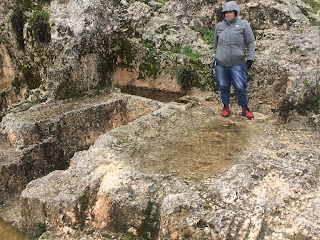 After this, it was time for lunch! We got to go to a souvenier shop, which gave us free lunch so that we would look around and buy things. I have to say, their marketing strategy is effective—loads of people were coming in and buying things. Did I buy anything? Maybe… I have a lot of people to buy souvenirs for, you know!


(If anyone has a request, let me know.)


After lunch we got to see the Bethlehem fields. These were the fields essentially directly outside the old limits of Jerusalem. I always pictures them far away, but they were big city fields! There are still shepherds there today, although we didn’t see them out and about (thanks, rain). I wonder if any of the people in Jerusalem were able to see the angels and star, too. Did they investigate? Or was it only for certain people at that juncture? Hmm. 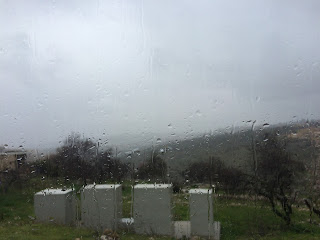 Oh, that must have been a wonderful thing to experience, though.


Our last stop for the day was the Hebrew National Museum, which is the equivalent of the Smithsonian or the British Museum—my two favorite museums, so I was excited about this. And guess what? I found Herod’s coffin! 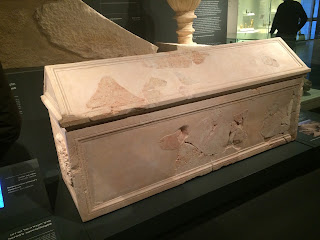 Not as cool as his bathtub, but I found it exciting.


We got to see some of the Dead Sea scrolls, although we couldn’t take photos of them, as well as a large replica of Jerusalem during the second temple period (when Jesus was around). The replica is generally considered to be accurate, and it really just throws into relief how colossal the temple was. Yes, I’ve seen the maps before, and the allotment of land was large, but you could probably have seen the temple from anywhere in the city. It was just that massive. 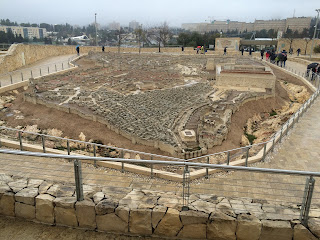 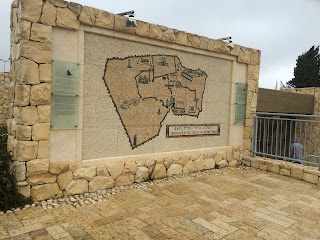 From there, we got to wander around. I saw the smallest Bible in the world… 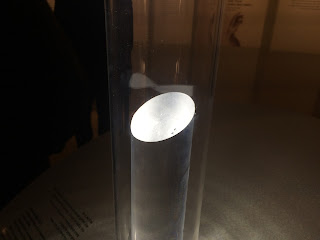 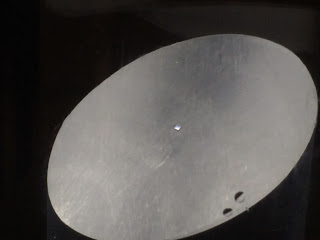 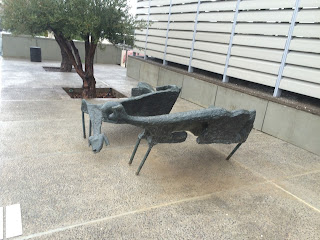 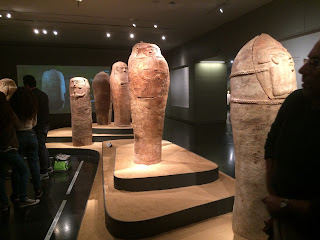 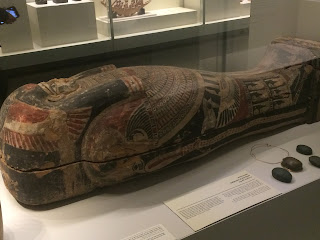 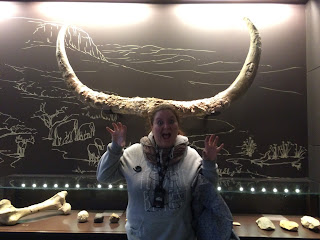 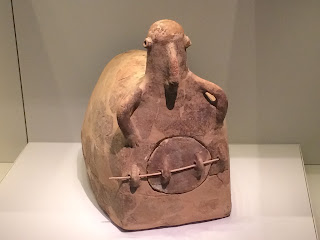 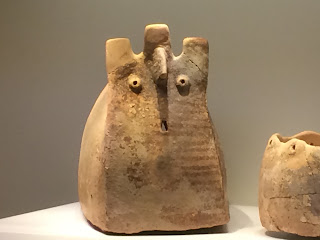 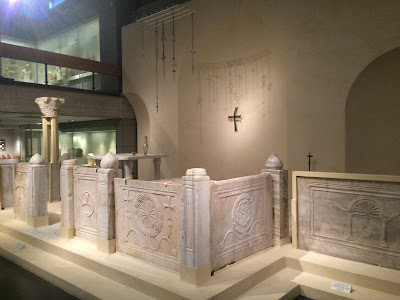 …and a whole exhibit about how birthdays are celebrated. That was a fun one. 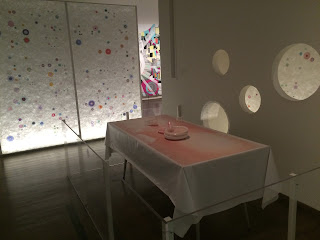 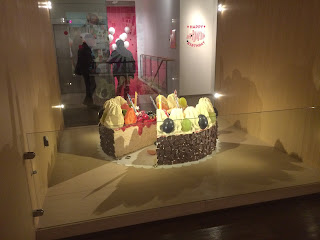 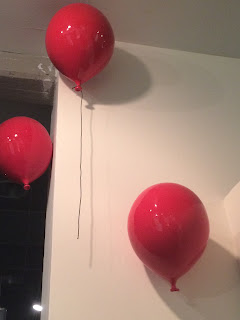 Once we got back from the hotel, we had a brief time to relax, before we congregated and the tour guide talked to us about the Passover meal and traditions. I keep on forgetting that Lent starts this week, but it is getting close to the Passover season, and now that I can picture the scenery of the Last Supper, it is nice to understand the meal itself. 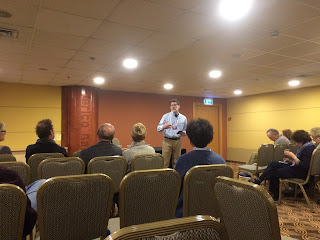 What I really found interesting was that there were subtle signs about Jesus in the Passover meal. For instance, when putting the lamb’s blood on the door, a person makes the sign of the cross to prevent death from getting them—the cross becomes a sign of safety. Also, it was interesting to understand when Jesus took the cup and the bread. There are several cups of wine with the Passover meal, and when Jesus takes them and talk, he’s usually referring to the meaning of the prior cup or the scripture that was prayed with that cup. It all comes together. Pretty cool!

After that, it was dinner. Tonight it is Italian buffet night. I’m not sure if Israel has a more accurate version of Italian food than the US (it is much closer, after all), but I’m positive I prefer the American version.

Tomorrow is our last full day here! I feel like I’ve been gone forever—I’m beginning to feel ready to go home. But that being said, there’s still so much I want to see and understand. I’ve seen loads, and I understand more, but it just wets the appetite, you know? And it has shown me how much I don’t grasp. But sleeping in my own bed and being able to read the language is quite appealing at this point.
﻿

Posted by Christine at 3:45 PM