And so ends day three! It kind of feels like day two, though, since days one and two actually smooshed together in my brain. But here ends February 3rd, anyway.
And what a day it was, too! I was really excited for today, and it proved to be even more amazing than I anticipated. Sleeping last night was hard; I woke up (along with my roommate, Aimee) around 2AM, and so we briefly went exploring, including down to the beach. The water, and whole area, was very quiet and calm at night, even though the most we could see of the Sea of Galilee was a big black outline. 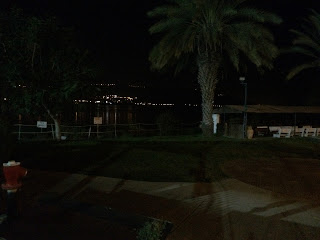 We went back to bed at around 4AM, and then woke up at 6 for our day to start! We briefly looked around the Sea of Galilee (finally! daylight! We can explore!). 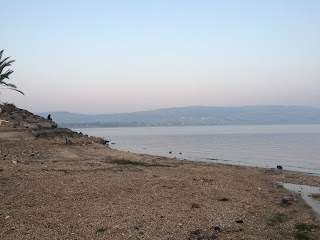 Breakfast was tasty. Pizza focaccia, shakshouka, salty feta cheese (I can't remember what it is called), other cheeses, some kinda of breakfast casserole thingy, olives, a sesame croissant, and mushrooms. 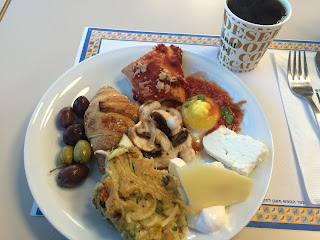 Focaccia tasted just like pizza, only less cheesy! I can see this being a teenager's preferred breakfast food. Shakshouka was, like I heard, exactly like how it look: eggs poached in tomato. It was tasty. The feta was AMAZING, and salty, but so crumbly and mmm. There was also something that tasted very similar to Gouda, a Brie with walnuts in it (also delicious), and some soft spreadable cheeses that were like a slimy Philadelphia, but better.

The casserole was WEIRD. It was bready and eggy with peppers and spaghetti (?). I don't know what it was. It was okay, but mostly just confusing.

The olives were also fabulous. So juicy and slightly salty and everything I dreamed an olive could be. The brown ones were best. The sesame croissant was kind of sweet and really nutty and lovely. The mushrooms were mushrooms. Nothing new there. 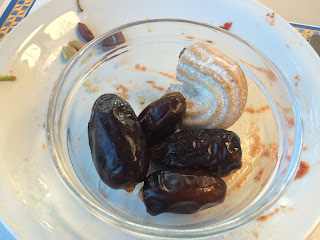 Cookie was like shortbread with raisins in it. The dates were not like the ones at home. Plump and kind of crunchy, slightly less sweet. Very good.


After breakfast, it was off to our first stop of the day—a memorial on the Sea of Galilee just outside the Golan Heights. Back when the heights were controlled by Syria (which, by the way, I could possibly walk to right now…I didn’t realize quite how close I would be), Syrians used to sit on the hills and sniper shoot Israeli fishermen. There was a quick and fierce battle, involving the IDF and the Navy SEALS (although the Navy SEALS quickly retreated, which is an interesting event), Israel got back the heights. Now there’s a memorial to recognize the people who died in the battle.

The memorial is right by an active mine field, so we couldn’t really explore nearby. 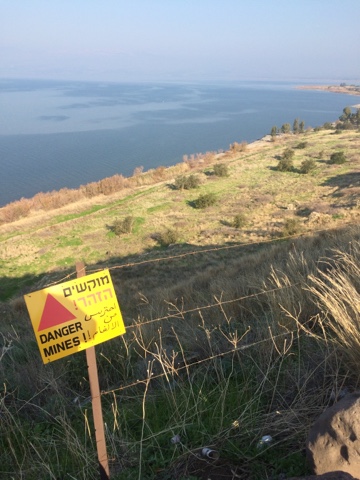 Best part, though, was a little rock formation. Tradition dictates that the little rocky slope is where Jesus put the demons into the pigs and they all charged down the hill (see Matthew 8). First actual Bible site!
From there we went up to the Mount of Beatitudes, where the Sermon on the Mount is preached. There is a large monastery up there now, but we can explore some of the area. They’ve done some tests and, indeed, if you are preaching from the top of this mount, people can hear you down below—there is natural acoustics at play. That explains how Jesus was able to preach to everyone! 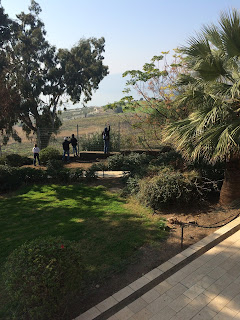 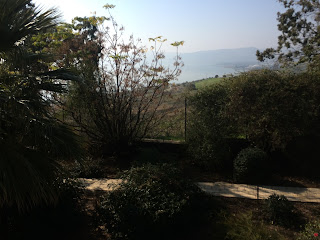 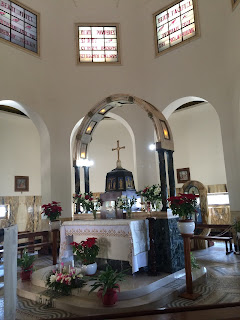 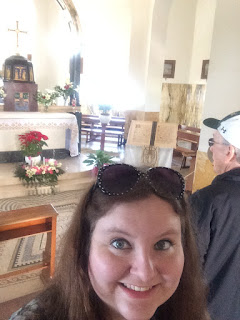 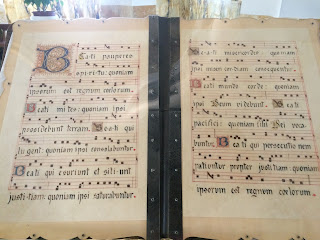 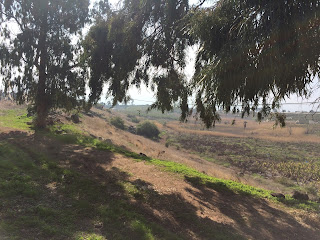 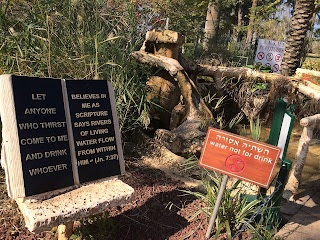 Next stop was another church, where Jesus fed the 5000. We got to see the actual rock where Jesus stood! (Traditional site, anyway.) 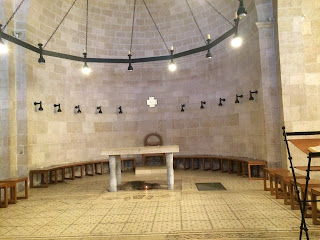 If you see that fish mosaic, that’s a very famous design commemorating the event. Note that there are only four loaves of bread; that is because the fifth one is Jesus.

Nearby is Capernaum, Jesus’ main home. It’s right on the sea (makes sense for all those fishermen), and was a pretty large fishing village back in the day that did quite well. The ruins are in pretty bad shape, but there is a decent synagogue. However, that synagogue is from the 5th century, but you can see the darker volcanic rocks at the bottom that would have been the synagogue during Jesus’ ministry.

Very close by is Peter’s mother-in-laws house, which was one of the first churches for Messianic Jews. Now it is still a church, which is pretty cool (building a church on the rock’s house), but the church looks a little bit like a flying saucer. Inside the church, there’s a glass floor where you can look down and see the remains of the house. It’s very close to the synagogue.


From here we went to lunch. At last, my fish and bread! However, we ended up at an actual restaurant, so it wasn’t quite what I expected (although it was filling). The pita bread here was super soft and chewy; it was far superior to any sort of pita bread I have had in the US. And the hummus! Nutty and creamy. I could probably have lived on those two alone.

By the restaurant was the docks where we got to RIDE ON A BOAT ON THE SEA OF GALILEE. The sea was so calm and peaceful; there weren’t really any waves at all, so you could sort of see how a person might be able to walk on it if there wasn’t a storm raging around. Of course, there was a storm when Jesus and Peter walked, but on a normal day you can sort of trick yourself into thinking that it isn’t a miracle.


Next stop—Magdala! This is where Mary Magdalene was from, of course. A few years ago, someone bought this land for a hotel, but they luckily did some excavating before building, and found the old city—including the synagogue, which is in excellent shape.


Final stop for the day was nearby, a place some people call the Jesus Boat. This boat is dated from 100BC, and information (from Magdala and elsewhere) confirm that it is the sort of fishing vessel used in Jesus’ time. It was huge; I always imagined these boats being pretty small, but now I can see how filling up these two boats would create a ton of money for Simon Peter et al.

Back to the hotel! We passed the Jordan River a few times today, going to and from places, but I was never able to get a good picture of it. It is smaller than I expected; I always imagines something calm and large for baptizing, but it moves fairly quickly. I will try and get some better pictures when we properly visit.

Dinner wasn’t anything too Israeli; I actually got Thai Beef curry and rice pilaf. But I did try a potato-y popover, and had a poppy seed cake for dessert. All of these cakes are SUPER dense, and given that I just had one out of poppy seeds, I’m probably going to fail a drug test if I have to take one in the few days. Let me state now, for the record, that I am just eating a lot of poppy seeds at the moment.


I tried going to sleep after dinner—so sleepy!—but I woke up around midnight, so I decided to write all of this down. Also, I must confess that I now have a sore throat—it’s all swollen and scratchy. I don’t think it is a cold; just the sore throat. So if you can send a few prayers/thoughts for healing, I would appreciate it!


On to tomorrow! I might actually see the Syrian border tomorrow. That will be interesting.
*
Periodic updates throughout the day are available on:
Instagram (photos)
Twitter (text)
Keep an eye on my adventures!
Posted by Christine at 4:31 PM